Note: clicking on a picture will give a larger version.
Camilla, David and Roger are doing the Jotunheimen Cross-Country-Trail, February 2019

Due to plane and train times, we had an overnight stop in Oslo. It was snowing quite heavily when we arrived but this had turned to rain the next morning. Thus, instead of visiting the Vigeland sculptures as intended, we enjoyed the Historic Museum. This was well laid out and very interesting, particularly their exhibition on how people had coped with the end of the last ice age.
We then had the train journey to Otta and the minibus to Lemonsjeon, our first hotel. 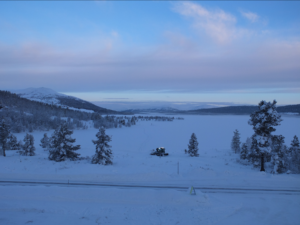 Early morning, our tracks being cut.
We woke to a bright day with light cloud and sunshine. We were to start by skiing round the lake. The track had been freshly cut and the snow was in superb condition. We had a wonderful ski.

We woke to clear blue skies with the snow glistening in the sun.
We made a good start on freshly cut tracks. The initial skiing was gently downhill. It was mostly among trees – these were beginning to lose their snow – but occasional gaps gave us excellent views.

By lunchtime there was misty cloud about and we did have some wind and snow. However, there were sunny breaks every now and again, giving photographic opportunities.

The main adventure of the afternoon was crossing a bridge which appeared to lack some planking. Bamboos crossed in front gave the impression that it was not supposed to be crossed. However there was no obvious alternative so we crossed with due care!

We could see, from the Skisporet app, that the track behind the hotel was being cut. We decided to go up this track! It started with a steady but not too steep climb for about 2 kilometres. The cut track then deviated from the track shown on the map and took us on a high level route with superb views of the surrounding mountains. When we reached the junction where we had intended to follow a track across a river we found that although there were poles marking the track there was no sign of it on the ground. Thus we decided to continue on the cut track down to the road.

We then took a track to a campsite with a cafe serving waffles. We indulged in these, along with hot chocolate. Thus fortified we took a longish route back to the hotel, crossing a couple of lakes, coping with a steep climb up but a reasonably gentle downhill apart from one icy patch.

After dinner, which featured sea buckthorn sorbet, we went outside to watch some sledging. Roger had a go but David and Camilla felt that discretion was in order!

The forecast for tomorrow is not good, at least as regards wind.

We woke to blue skies but as predicted there was a high wind. We again used the Skisporet app to decide where to go but when we got a bit high, although the track had been cut, it was clear that the wind would be an issue. We turned round and went down to the trees where the wind was much less of a problem. We skied, via a different track from yesterday, to the waffle cafe. We knew that there was to be some dog sledging here so we went down to watch. It was clear that the dogs and the riders were having a great time!


After a coffee we returned towards the hotel intending to take a lower route to the freshly cut tracks. It was still very windy so Roger decided to stay at the hotel. David and I proceeded through a fairly short windy patch into a tree covered area where we had an excellent ski on freshly prepared tracks. We also recce’d the beginning of our route tomorrow.

The forecast for today was for gale force winds around midday. We asked the hotel for advice and they suggested that we leave as soon as possible and take a route that went up to the road at one point. They also rang Bessheim to check they would be happy to meet us.

We had an excellent ski during the morning. A reindeer was spotted ahead and duly photographed. The chosen route took us over a bridge with lovely river views. We could see heavy clouds moving quickly, but to the South, so began to hope that the wind was passing us by.

After crossing a lake and having our lunch, sitting on our skis beside it, we set off again. The route was not very clear at this point. We thought we should cross by a campground, to the final lake we were to cross, but we could not see a marked track across this lake. Instead we headed for a path at the East side of the lake. The wind began to get bad and got so bad at one icy stretch that we decided to return to the road and ring for advice. We did this and Bjorn from Bessheim came out to us. Roger went back to the hotel with him. David and Camilla, having been reassured by Bjorn that we should cross the lake to the path on the Eastern side continued to ski.

We crossed the lake, which was quite wet in places due to the warm weather and reached land. No path was to be seen! Our gps told us that we had landed on an island! Rather than go round the island on the lake we crossed the island through trees and fairly deep snow. We crossed the last bit of lake and found the track. This was easy to follow and there was not much wind so we had a pleasant ski for an hour or so. We then came to a point where we turned right and headed for the hotel. We suddenly felt the wind which was coming at us. This made the last part of the skiing quite slow but we made it!

The day finished with a large glass of beer and a Norwegian buffet.

Our last day was to be less windy but well above freezing. We had decided to ski a round trip via Gjendesheim as this would take us to the end of the Jotunheimlyope. We started by crossing the lake back the way we had come the night before. There was now considerable expanses of water on top of the ice but we had been assured it was still safe!

We returned to the junction and turned right. The track was visible but in poor condition. It had an icy crust but when your foot or ski broke through the ice it sank deeply into the snow. We often sidestepped down slopes that would not have worried us in better conditions. An icy road proved particularly challenging to cross!

The views were wonderful however and we enjoyed our ski down. There were several small lakes at the bottom, one of which was skirted around with skis off as going across looked to be a very wet option. As we approached Gjendesheim we sidestepped and skied down the last slope to a river crossing. David and Roger judiciously sat down before finding their way across. Camilla thought she could ski across, resulting in somewhat wet feet.

The snow was rapidly disappearing from the hillside so we decided to walk back along the road. This was very pleasant with enjoyable views. It was satisfying to have completed the loype on skis.